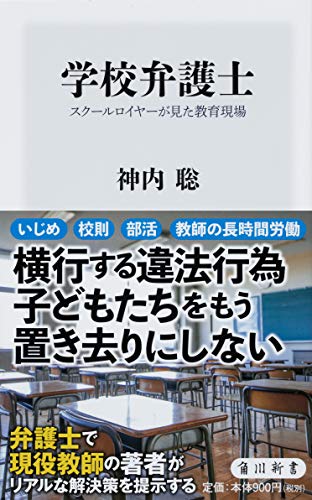 The material introduced today "School Attorney (Japanese only)" explains "The educational scene seen by School Lawyer", and the following phrases were impressive in the part Perpetrators cannot be expelled".

"There is also a big problem with the legal system itself that bullying cannot be properly resolved in Japan.

The first legal system that should be revised immediately is that public elementary and junior high schools are not allowed to suspend or expel students without exception.

I think schools need to be able to suspend or expel perpetrators in exceptional circumstances such as bullying.

When I say this, some people oppose by saying that children's rights to education would be neglected.

Then, what do they think about the fact that bullying victims cannot come to school?

Overseas, elementary and junior high schools are allowed to suspend or expel students without exception.

No unrecognized education system was found outside of Japan, at least in major countries.

From that point of view, the Japanese education system is unique.

Bullying victims are far more likely to transfer than perpetrators in Japan.

The reason why victims have to transfer is because of the Japanese education system, where schools cannot suspend or transfer perpetrators as in this case.

Far from expelling, the perpetrator cannot be temporarily suspended in the Japanese educational system.