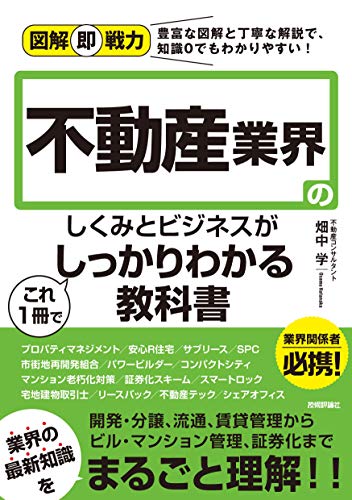 The material introduced today "A textbook that clearly understands the mechanism and business of the real estate industry in this one book (Japanese only)" explains "The real estate industry, which accounts for 10% of the gross domestic product, can be divided into five categories: development / sales, distribution, leasing, management, and securitization", and the following phrases were impressive.

"The history of the condominium business can be said to be the history of development along the suburbs by private railway companies.

Due to the expansion of the urban area at the end of the Meiji era, private railways extended the route to the suburbs, and by selling residential land and single-family homes, the number of people living along the railway line increased and passengers were generated.

The prototype of the condominium business, in which land is bought cheaply, developed, and sold at a high price to make a profit, was created in this era.

The first sales business is the Tamagawa Garden City Planning by Tokyo Trust Co., Ltd. (currently Japan Real Estate Co., Ltd.), which began sales in 1913 in Tokyo, and along the Minoh Arima Electric Orbit (currently Hankyu Railway) in 1909 in Kansai.

The development project of Minoh Arima Electric Orbit was planned by Ichizo Kobayashi, who was also called 'Private Railway King of Kansai', and development was promoted in Ikeda, Toyonaka, and Minoo in Osaka Prefecture.

Monthly installment sales (payment in installments) of built-for-sale houses (200 units) were carried out.

In this way, the real estate industry, which was born in the early Meiji era, was developed from the end of the Meiji era to the Taisho era, and the sales business flourished." (Unquote)