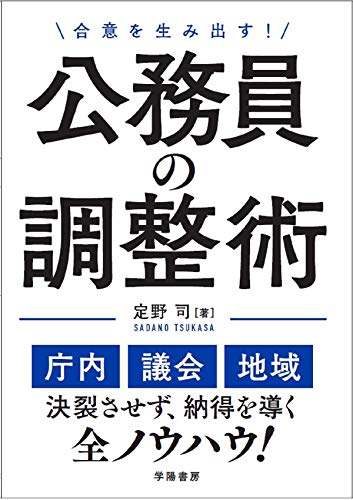 The material introduced today "Adjustment Skills for Civil Servants (Japanese only)" has a catchphrase "Create Consensus!", and the following phrases were impressive in the part "Understanding the Difference between Negotiation and Coordination".

"A skill similar to one of the human skills, 'adjustment', is 'negotiation'.

What is the difference between these two skills, which are often used interchangeably?

First, negotiation is the process by which two or more parties with interests or conflicts assert each other's demands and reach a final consensus.

Negotiations are 'unbeatable' because you can prove the legitimacy of your claim based on law and evidence.

Therefore, negotiations tend to be aggressive.

Coordination, on the other hand, is done to prevent the occurrence of interests and conflicts.

Coordination is prophylactic and defensive, unlike aggressive negotiations that begin only when interests and conflicts arise.

In most cases, our stakeholders are not in a relationship that can be 'broken' as a result of negotiations.

That is why it is necessary to acquire adjustment techniques that will not break.

In addition, the adjustment technique is to guide the negotiations so that they are not through, or even when they are through, to prevent them from being through.

The coordinating partner is an ally toward the same goal (consensus point).

In addition, negotiations deal with humans, but coordination deals with common conditions for agreement.

The skill that creates new value through this empathy is the adjustment skill." (Unquote)