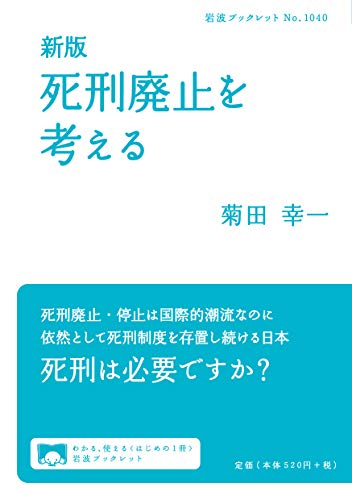 It is claimed that the death penalty system limits the number of violent crimes to the current level, but there is no scientific evidence of deterrence.

However, I think that this problem cannot be scientifically proved in the present when the crimes applicable to the death penalty are stipulated by the law of the country.

However, the death penalty under Article 81 of the Penal Code for inviting foreign invasion (a person who conspired with a foreign country to use force against Japan) has never been applied, and is also sentenced to death under a special law.

There were only two cases of explosive use (but combined with murder), and the death penalty under other special laws has not been applied for decades.

Most of the crimes to which the death penalty applies are robbery murders and robbery rape murders.

In this way, the target of the crime deterrence of the death penalty is mainly premised on murder, but when the murder is also a concrete example, it is complicated under what circumstances the murder was committed, and if you simply kill a person.

It's not as simple as being discouraged from murder because of the death penalty.

So, first, I would like to introduce some data on the recent occurrence of the death penalty and violent crimes in the United States.

Out of the 50 states in the United States, 25 are legally and de facto abolished in death penalty, and 17 of the incumbent states have not been enforced within the last five years.

Only eight states were enforced in 2018.

In fact, more than 80% of all states have been abolished or suspended.

According to The New York Times (September 22, 2000), 10 of the 12 states that abolished the death penalty at the time had lower homicide rates than the national average, and all states had higher rates.

Especially in the last 20 years, the homicide rate in the states with the death penalty has been 48-101% higher than in the abolished states.

It is not possible to immediately determine whether or not the death penalty has murder deterrence with such materials, but it is impossible to scientifically prove this issue, and while controversy over a long history does not give a rational judgment, the current situation in the United States is reported. Is a powerful resource." (Unquote)