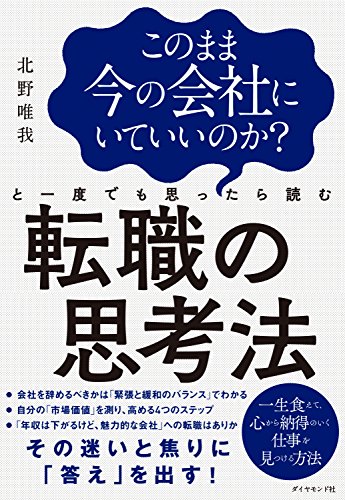 The material introduced today "Is it okay to stay in the current company as it is? Read this book once you think about changing your job" reiterates that "What you need to change your job is not information or skills, but a certain judgment axis" and the following phrases were impressive.

"'Around 30 years old is a fork in your career'

That's what the copy of the magazine you picked up at the bookstore said.

As you flip through the pages, you'll notice the special feature written in bold red.

"The miserable ending of a large company corporate employee who lost his or her promotion potential in the 40s" was vividly depicted there.

A person who has worked for a large company for 20 years has no choice, but to leave the company early due to poor financial performance.

Somehow, they don't want to lower their standards of living.

They think so and desperately change their jobs.

But it doesn't work.

That should be the case, and unless they are very lucky, someone who has somehow worked for 20 years in a large company does not have deep expertise.

Still, their prides were high, and they looked down on people who are working for small companies.

Of course, the interviewers couldn't miss it, and they couldn't get high salaries.

In other words, the job change failed.

They are prepared to reduce their annual income and jump into a small company.

But small companies are not as well-prepared as large companies.

The corporate title doesn't work either.

As a result, they couldn't do what they expected when I changed jobs, and I ended up retiring because of the environment in less than a year.

In the times, it became difficult for them to appear at the previous company's reunion, but they disappeared from the city center without being known." (Unquote)