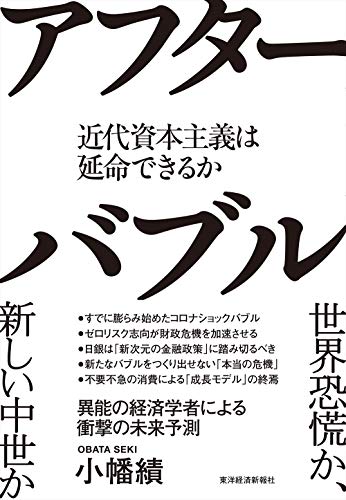 The material introduced today "After Bubble" challenges the proposition "Can modern capitalism prolong the life?", and the following phrases in the "Japan that sacrifices safety for peace of mind" part were impressive.

"In this most typical example, the worst result was the nuclear accident.

There are still various opinions about the nuclear accident, so let's touch on only two things that are clearly irrational.

First of all, it is a problem that socially accepted the zero-risk myth that nuclear power plants have no risk at all.

There can be no zero risk in any production activity or life.

If you want zero risk, you must completely ban the use of cars in your behavior, and you must not ride a bicycle.

However, at nuclear power plants, we had to assume that the risk was zero.

In constructing the nuclear power plant, it had to be zero in order to eliminate people's anxiety, and 0.0001% was not good.

It was not possible to manage the usual crisis by controlling the risk as low as possible and publicly discussing and preparing a scenario in case of emergency.

In that case, it became impossible to discuss evacuation drills, procedures, and post-processing.

And the social impact of the accident has expanded infinitely.

The government responded with all its might to reassure people that it was zero, even though it was impossible to do so because they demanded zero risk.

It was not logically persuasive because it was logically impossible, but he appealed emotionally and tried to remove any anxiety.

The problem of decontamination after the accident became even more prominent.

Radioactive material accumulates on the surface of the soil, and it is dangerous if it accumulates, so decontamination of the topsoil, the point is that it can only be removed and transferred to it, but this was done.

At that time, it was decided by an expert meeting to aim for 5mSv (milli-sievert) a year.

However, due to the voices of the people of Fukushima and the public, a political decision changed the goal to reduce it to 1 mSv per year.

As a result, unrealizable targets (below the average radiation level in nature) cost trillions of yen each year.

And what happened to decontamination now?

Many who criticized at the time were not interested and forgot." (Unquote)