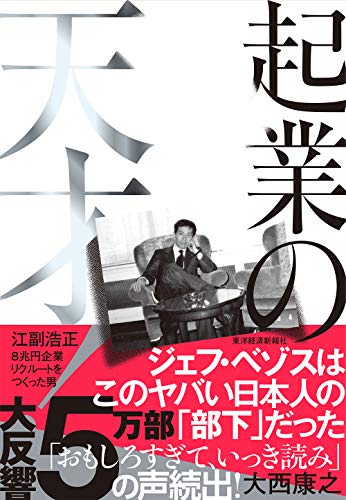 The material introduced today "Entrepreneurial Genius!" clearly describes the life of Mr. Hiromasa Ezoe, "the man who created the 8 trillion yen corporate Recruit", and the following phrases in the part "in a country without angels" were impressive.

"Ezoe was surrounded by talented subordinates, but there was no elder who would be kind enough to give advice from a wide perspective and sometimes ask ethical behaviors.

It is a major weakness of the Japanese social system that surrounds venture companies.

There are venture investors called 'Angels' in the United States.

The name is cute as 'Angel', but they are all well experienced veteran investors.

It is also the Angel's job to teach young entrepreneurs this kind of ruthlessness.

However, Japan does not have a real angel to let entrepreneurs experience the rules of capitalism and the rigors of society.

Moreover, there was no veteran around Ezoe who started a business immediately after graduating from the University of Tokyo and had never worked under a person to teach the rules of the world.

Around Ezoe, there were only politicians who were trying to make a huge fortune and people who praised Ezoe." (Unquote)