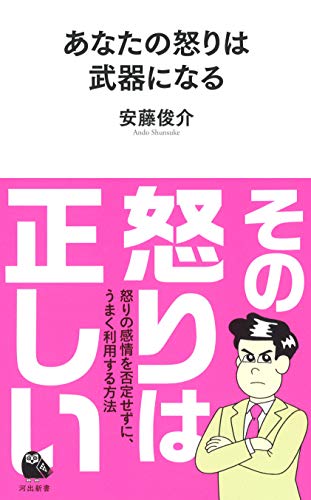 The material introduced today "Your anger becomes a weapon (Japanese only)" explains "How to use anger well without denying the feeling of anger", and the following phrases were impressive in the part "Practice required to use anger".

The idea of ​​treating anger as a poison and afflicting oneself and those around us can be found in the quotes of various Great people, regardless of age, east or west.

"Anger should be considered an enemy" Ieyasu Tokugawa

"Angry begins with recklessness and ends with regret" Pythagoras

"Angry is harmful to others, but more harmful to those who are driven by anger" Tolstoy

"If you overheat the anger that blows fire because of the enemy, you will get burned" Shakespeare

Anger is an enemy, a regret, a harmful thing, a burn, and these words remain in posterity in the sense that they are not good for you and you should let go.

Aggressive anger is not recommended at home, at school, at work, or anywhere.

Anger management, which the author reports, is also mistakenly transmitted to the world as a method that does not get angry or frustrated.

But anger management is not without getting angry.

Why do we consider anger to be so poisonous?

First of all, it is thought that anger caused some kind of painful eyes and caused inconvenience.

If you are an animal living in nature, it is okay to use your anger and protect yourself every time you feel danger.

Far from being a problem, you need anger as a survival strategy because you can't survive otherwise.

If there is an animal that does not get angry in nature, the species will be eliminated in a blink of an eye.

Without anger, you can't detect danger.

Anger is not always a poison for animals.

However, it is strange, in a sense, that the feeling of anger is poisonous to humans even in the same animal.

In other words, since the period of being an animal was overwhelmingly longer, it is thought that human beings still have the remnants of the animal era even after the creation of civilization and society." (Unquote)