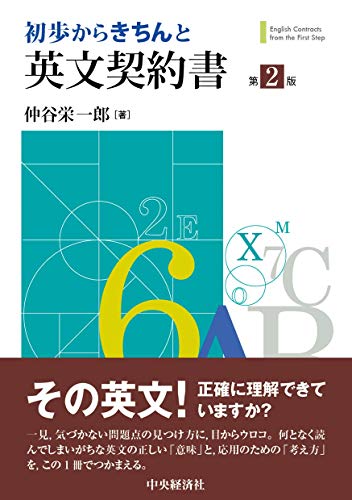 【PDCA (plan-do-check-action) Diary Vol. 544 "It is important to clarify the English contract"】

The material introduced today "English Contract 100 (Japanese only)" explains the basic matters for beginners to take the first step in English contract practice, showing examples in English expression and the following phrases were impressive in the part "How do you read the English contract?"

"There are two ways to read an English contract, one is as English and the other is as a contract.

To read as English is to understand exactly as it is written.

All that is needed for this is language skills.

Reading as a contract means pointing out problems in content and aiming for improvement.

It is not enough to read it as English and understand the contents, and it is necessary to be able to discover problems as a contract and propose improvements.

The only way to develop the ability to read as a contract is to read, think, and discuss many contracts.

When reading a contract, first of all, the basic notes to keep in mind are summarized as follows.

1. Tips to ease your mind: Sometimes you don't understand

What I'm saying is, 'Sometimes you cannot understand the text of the contract presented by the other party'.

Even those written by British and American lawyers have mistakes and uncertainties.

What is written by non-experts and non-natives is even more so.

Keep in mind that the contract under negotiation can be amended indefinitely.

2. The most important tip: Clarify

This is one of the basics of thinking when reading a contract.

It is no exaggeration to say that many of the disputes arise from the unclear text of the contract.

When reading an English contract, the clarification attitude is of utmost importance.

3. Tips you are not supposed to say: I can make such a claim later

When various interpretations are possible for a certain article, there may be an opinion that 'if there is a dispute, we can make such a claim in our favor, so it is okay to keep it as it is'.

In order to finally settle it, it must be done by trial, and there is no guarantee that it will win.

And even if you win, it takes a lot of effort, time, and money.

If you sign a contract unclear without noticing the problem and later have a dispute, you must consider a discussion that will give you an advantage.

However, if you are going to conclude a contract from now on, you should fix it because you can fix it as much as you want, and do not leave it unclear because you think that you can make such a claim later." (Unquote)