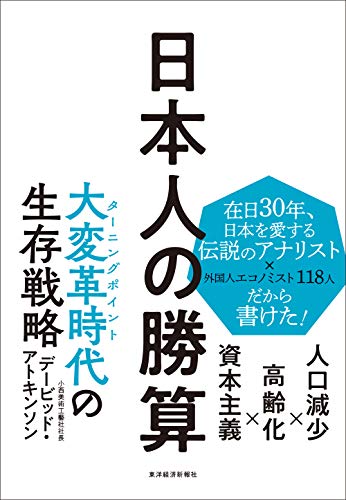 【PDCA (plan-do-check-action) Diary Vol. 555 "Is the unchanging power of the Japanese abnormal?"】

The material introduced today "Japanese prospects of victory: Population decline x aging x capitalism (Japanese only)" has a catchphrase "Survival strategy in the era of great change (Turning point)", and the following phrases were impressive in the part "The unchanging power of the Japanese is abnormal".

"There is another reason to expect an increase in the minimum wage.

If you hit the computer, you can clearly see that this country will be destroyed unless the current Japanese economy is changed, but I feel that few people are working on it in earnest.

Also, I think Japan is the most difficult country to reform as a developed country, even though it needs more reforms than other countries.

Someone said, 'The unchanging power of the Japanese is abnormal,' and I totally agree.

Until now, I have been keenly aware that reforms are slow to progress in the financial industry, cultural property industry, and tourism industry, with all the voices of opposition, no matter how small.

It cannot be understood by ordinary human senses that even in the face of such a crisis, they will not change themselves.

It's nothing but anomalous.

Why don't you try to change so stubbornly?

Those who don't think they need to change make this rationale.

Japan is the third largest economy in the world.

After the war, the Japanese economy has grown significantly.

Japan is a technological powerhouse.

Japan is a special country.

Therefore, the Japanese way is correct and does not need to be changed.

When I point out that I need to change, I get the following counterargument:

There is no precedent.

Comparison with overseas is an imposition of values.

The traditional way is Japanese culture.

Even if you say data, data, you don't need data.

In addition, the true person says, 'I'm not going to do my best anymore.'

There are many people who have such an opinion that it is biased because the average age of Japanese people is rising.

After the age of 40, humans are slow to change and tend to be reluctant to accept new ideas.

In Japan, the average age of the people is close to 40, so it seems that society as a whole is hard to change.

In any case, what is important is how to move this stubborn country of Japan.

Looking back on history, it is clear that Japanese companies will not move toward improving productivity if they are left free.

If so, there is no choice but to force it.

The best way to do this is to reduce the minimum wage." (Unquote)